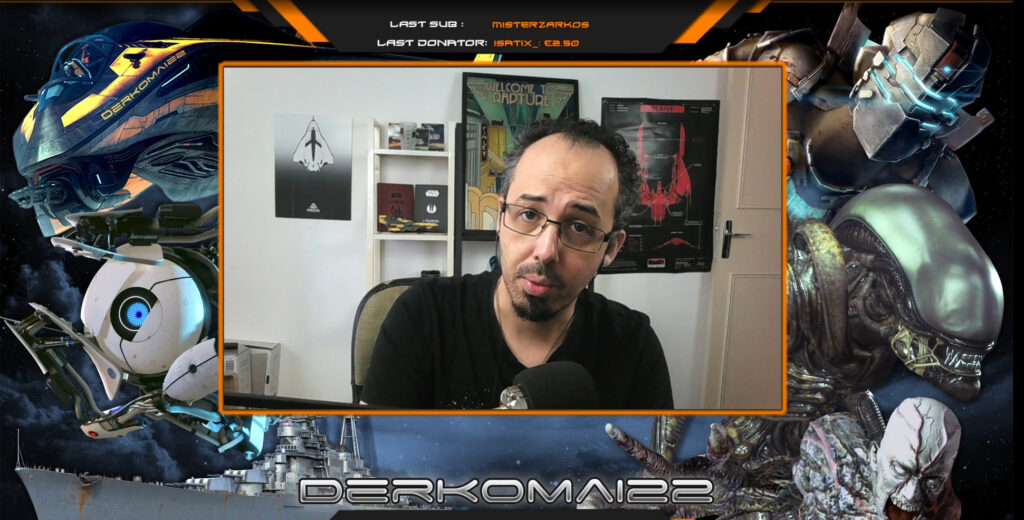 Note: this article is a translation of an interview originally conducted in French by Wormhole Tribune.
We apologise for any errors in translation or clumsiness with the language of Shakespeare which are the responsibility of the newspaper and not of the person being interviewed

WT : Hello Derkomaï22 , thank you for accepting to participate to this first edition of “Citizens Portraits of the stars” !
First of all, could you introduce yourself in a few lines for those who would not know you yet?

Derkomaï22 : Well, I’m Derko, or more precisely Derkomaï22, an average 30 year old guy who makes videos on YouTube and streams on twitch about games that interest him, including Star Citizen.

How long have you been playing Star Citizen and how did you discover the game? What was the trigger?

I took a pledge in January 2014… At the time, apart from walking around in a hundred square meter hangar, there wasn’t much to do. I discovered the project when a member of the team I belong to suggested it to the rest of the team: we were initially only working on Planetside 2, but we were looking to diversify. And Star Citizen ticked the boxes we were looking for in a game.

Can you describe your typical session on Star Citizen? How do you define your style?

Well, I’m almost exclusively a PVE player. I do PVP sometimes, but I know my level, and I know I’m very, very far from the top. I’m not bad, but I consider myself average in terms of driving. That’s one of the reasons why I concentrate mostly on PVE. The other reason is that, apart from creating content (streaming on twitch, or recording footage on YouTube), I hardly play Star Citizen. And, since PVE gameplay allows me to breathe more than PVP gameplay which requires much more concentration, I can devote much more of my attention to the chat of my stream, and answer viewers’ questions, or simply joke and debate with them about things. I usually say that what I do in-game is anything but exceptional, and that anyone can do it. The game only serves as a backdrop for me while we chat with the viewers, and at best, it serves as an illustration of an answer to a question I’ve been asked. In short, my typical session is to log in to the game, take out one of my favorite ships (usually Avenger Stalker or Gladius Valiant), go to the outskirts of a planet, go through the missions on the “good side of the law” (yes, when you’re not comfortable in PVP, you avoid ending up with crimestat), and chain them together until I feel like changing zones.

Do you already have an idea of the gameplays you would like to target as priorities when the game is released?

To answer this question, I need to lay the foundations of the objectives of the corporation I belong to. Basically, we don’t want to deny ourselves any gameplay, as long as it’s legal in game. We’ll certainly set up in the core sectors of the Empire, where security will be more important, to the detriment of the profitability of contracts. Our goal is not to become the most powerful organisation in the universe, but just to have a good time with friends. With that in mind, when I’m working with my corpo, I’ll be part of the security, and try to help out as a light hunter. When I’m working on my own, I’ll be more of a PVE mercenary and bounty hunter… So, yes, CIG’s desire to make it difficult to differentiate between players and NPCs puts that desire in the conditional… But, who knows… maybe by the time the game is released, I’ll have gotten better at dogfighting.

Do you have any big goals or dreams you would like to accomplish once the game is released? What is your endgame?

I don’t really have any big goals for the final game. I keep in mind that my character will be an average citizen, and like all average citizens, he won’t have an exceptional destiny. So, just making sure I can pay the insurance on my ships and equipment and avoid dying… that’s not bad. After that, if my company has an ambitious goal, I will feel better knowing that I have contributed to its achievement.

What is on your wish list for the next 5 years?

I think it’s on a lot of people’s lists: Squadron 42… and I think we can even count on about two years to see it happen. That will give us a bit more clarity on how much confidence we can have in CIG: if they screw up, it’ll be shaken pretty badly. If it’s a success, that will be reassuring, even if the challenge of Star Citizen is on a different scale to a single player game.

3.15 sees the arrival of medical gameplay, what would your expectations be in this regard?

I don’t really have any expectations in that area. I haven’t really read up on the subject, but I feel like there will be something weird at the beginning, like paying insurance in aUEC to be able to respawn in a clinic and not another one… Anyway, we’ll see.

What are your expectations for Citizen Con?

We already know that there will be a panel dedicated to server meshing, but I’m expecting information about other technologies that CIG is working on, and to have good surprises like their presentation of the Quantum system. After that, as for their famous Gameplay phase, I think they will present us the continuation of the 2019 mission which will take place, for the moment, in the Pyro system. But I’m not getting too excited: that would be the best way to be disappointed. And if we want to be a little bit crazy, why not an approximate date for the release of Squadron 42?

Let’s talk about ships, what is your favourite flyable ship in the current game?

Well, I don’t think I’m going to surprise anyone who is used to looking at my content… but I’m going to say the Avenger Stalker. It’s my base pledge, and even though I know there are ships that are better at this or that, it’s still my favourite, and it packs enough of a punch to surprise more than one person.

There is one brand of ship I would love to see developed… Krüger. And to be more precise, a ship I’d like to see is a competitor to Origin’s 300 series, but made by Krüger. In the lore, it says that Krüger is a quality brand, whose ships are made by hand. And I have to admit that it… well, it intrigues me to see something like that in the Verse.

What advice would you give to a player who is new to the game or interested in getting into it?

To get the Aurora pack with access to Star Citizen and Squadron 42, do some investigative missions to make easy credits while learning to fly their ship, then buy better equipment for their ship (weapons, power generators, coolers, etc.), and diversify according to what interests them in the game. And if he begins to feel the limits of his ship, to rent or to buy in game a more adapted ship. And above all, don’t hesitate to ask questions to people who have many hours of flight experience.

If you had to choose a mentor, anyone, who would it be?

Difficult question… But I think my choice would be Daium. Since we’ve known each other, there’s always been a good understanding between him and me. I really like the way he analyses the game and the information from CIG. And when he speculates, it’s always something calm and coherent, often based on what we can find in other works (I particularly liked his parallel between the physical inventory in Star Citizen and what we can find in Escape from Tarkov). Moreover, he is a quiet kind of guy, and that’s something I can relate to completely. To paraphrase JDG (note: “Joueur du grenier“), I can’t stand having keys waved in front of my nose every two seconds to get my attention. So, of course I appreciate Daium’s calm attitude.

Whether it’s in-game or around the game, what is your greatest achievement on Star Citizen so far?

I think the greatest achievement I can point to in my life is being able to make a living from my streams, largely on Star Citizen. And, it’s unfortunate too, because I didn’t do it. Dirty Biology made a video called “Youtubers and their psychological problems” where he explained that, when successful youtubers were asked what got them there, they almost always left out the luck factor… That video made a huge impression on me, and, yes… I was lucky. I was lucky to have made content about the game when the French-speaking community was starting to learn about the project, lucky to have met the right people at the right time, lucky to have had an understanding entourage who supported me, lucky that viewers came across my content and decided to stay… in short. I was lucky.

Do you have a game-related anecdote to share with our readers? A laugh or an embarrassing moment?

I think my best laugh was with my only proven case of stream-stalk. Basically, stream-stalk is when a player uses a content creator’s live stream to find out where they are, and thus try to ruin their session. Anyway, this stream-stalker had been on my back for several weeks already, regularly having fun destroying my ship when I wasn’t in it, hitting it while it was on the ground next to a city or directly on a pad. Anyway. Two days in a row he tried to do the same to me, and two days in a row it backfired. Basically, I was sitting on a HURL1 RestStop pad, he positioned himself above me, throttled up to hit me… and at the last moment, I put it in reverse and took off. Moral: a station is more resistant than a ship. As much as the first time, it made me smile (a smile of satisfaction, we won’t lie). But the next day when he did it again, I burst out laughing, punctuating the scene with a “this guy is magic! Strangely enough, that was the last time I saw him in game.

As a content creator, what projects are you currently working on?

So, I have several projects on hold. On Star Citizen, firstly, I’m waiting for CIG to calm down a bit on the changes to the flight model so I can resume my ship presentation series. Then, I have to finish my narrative series: I have only one episode left to finish… but the quality of the builds, plus the arrival of some features forced me to postpone the shooting of the latter. Apart from that, I find the video game landscape a bit poor at the moment… and apart from the Dead Space remake, Hollow Knight Silksong, and maybe Battlefield 2042 and Back 4 Blood… I don’t have a lot of games I’m excited about. So… we’ll improvise.

The last word, a few words on the subject you want to share here

Ah, for the final word, you’d have to ask my Mentor: he’s specialised in that !

Thank you very much for answering our questions! 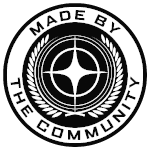